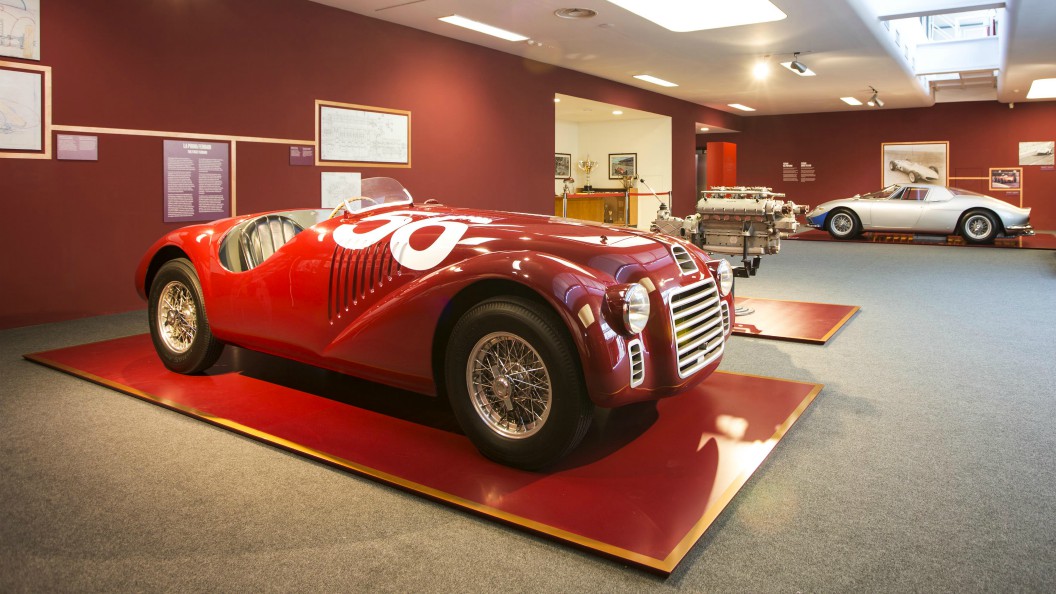 Ferrari has, ever since the company was founded way back in 1947, been something of an Italian icon. It’s also, arguably, the world’s leading luxury car brand.

Enzo Ferrari famously founded the company in order to build a car to beat Alfa Romeo, which he’d previously driven for. That company had relocated from Modena – Enzo’s birthplace – 20km down the road to Maranello. The rest is history, and for the past 70 years some of the world’s finest examples of automotive engineering have been produced at the company’s factory.

To celebrate the famous marque, the Ferrari Museum — Museo Ferrari — opened in 1990 next door to the factory and tells the story of the iconic ‘prancing horse’, with numerous fine examples of what Ferrari is most famous for: its many successful F1 cars, legendary sports prototypes and GTs, and those gorgeous roadsters that have graced roads from California to Monaco.

The museum has proven quite the success, with last year alone seeing it welcome some 344,000 visitors. To cope with the huge numbers this must see attraction has recently expanded, allowing more space for exhibitions and displays. Two new exhibitions have also been added, ‘Under the Skin’ and ‘Infinite Red, to celebrate Ferrari on its 70th anniversary.

The museum’s a real treat for Ferrari racing fans

Created in partnership with the London Design Museum (the exhibition will move to London in November, 2017), ‘Under the Skin’ describes the history of the brand down the years starting with the 125S, Enzo’s first car. The display features technical drawings from the archives, the design and engineering hidden behind the exteriors, and models showing Enzo’s experimentation with new scientific techniques.

The ‘Infinite Red’ exhibition features some of Maranello’s most exclusive creations for track and road. Formula One cars on display include the 500 F2, in which Alberto Ascari won Ferrari’s first world drivers’ title in 1952; the F2004, the Ferrari that won the most GPs in history and which concluded Michael Schumacher‘s epic run of world titles; and the F2008, which won the World Constructors’ Championship with Felipe Massa and Kimi Räikkönen driving.

Among the GT cars on display are the iconic 250 GT Berlinetta “Tdf” which dominated races in the second half of the 1950s, the 250 GT Berlinetta SWB, and the 250 GTO. Limited edition specials include the F50, the Enzo, the LaFerrari and the FXX K version for exclusive use on track.

To help you get the very best from your visit, the folks at Luxury Italy have asked me to put together a list of my ‘Top 10 Things to See and Do at the Ferrari Museum’. Have fun!

Top if my list is the first car to ever bear the 125S name. Way back in 1945, Enzo Ferrari had one thing on his mind: he wanted a car to beat the all-conquering Alfa Romeos of the day, so commissioned the design of a new car. On May 20th, 1947 that car – the truly innovative 125S – had its first of many victories at the Rome Grand Prix.

One particular model has always been top of every enthusiast’s wish list – the truly gorgeous 275 GTB, launched in 1964 at the Paris Salon. The desirability of the 275 is verified by its celebrity owners, including Eric Clapton, Clint Eastwood and Peter Sellers. However, the best–known celebrity owner had to be Steve McQueen who owned a 275 GTB/4. Altogether, fewer than 300 Ferrari GTB/4s were built and these remain as sought-after today as they were when new.

Ferrari always likes to push the boundaries, most recently with its innovative LaFerrari, the company’s first car to be equipped with two different types of engine – petrol and electric – and bringing F1 technology to the road car. Now, to celebrate its 70th anniversary, Maranello has created a car like no other, the magnificent LaFerrari Aperta. This ultimate roadster was a real challenge for Ferrari engineers as it had to provide the same handling and performance as the coupé while including performance of 0-60 in less than 3 seconds and a top speed of over 200 mph – all the while ensuring buyers were undisturbed by airflow. The result is, I believe, a machine even more beautiful than the original LaFerrari.

If you fancy experiencing some of the world’s most famous circuits – such as Monza, Silverstone, Nürbürgring or SPA Francorchamps – there are two semi-professional simulators available to experience the excitement being in the seat of an F1 single-seater. It’s extremely realistic, thanks especially to the feel of the track and the sensitivity of the throttle and brake as you speed around the track. Of course, most of us are not professional drivers, so while the simulators have professional settings, it’s also calibrated for ‘gentlemen’ drivers.

Have you ever watched a Grand Prix and been in awe of the amazing speeds with which the wheels are changed? Well, budding mechanics now have the chance to try for themselves on a Formula 1 single-seater available for tyre change tests as per the classic pit stops. The change is timed and photographed as you work, and at the end of the experience photographs can also be taken beside the single-seater.

Experience a shuttle bus tour to the Fiorano track and along the Viale Enzo Ferrari Boulevard in the factory complex. Whilst travelling around the site, a museum guide will tell you about the Ferrari track where all competition and road tests have been carried out since 1972. You’ll see the Ferrari Campus where the cars are built, as well as the historic part of the factory which has been meticulously preserved (not least the factory entrance which dates back to 1947).

If you purchase the Museum+Track ticket, not only do you get to tour the museum, but you’ll also be able to lap the Autodromo di Modena for 15 minutes in your own car. Highlights of the experience include an introduction to the track by a professional driver, together with information on all safety issues (if you enjoyed your 15 minutes so much, additional time can be requested). Afterwards, refreshment and food can be enjoyed at the onsite bar/café.

Having spent time exploring Maranello, those in need of nourishment should head to the excellent Il Cavallino Ristorante. Popular for its local Emilian cuisine inspired by traditional recipes, menu items are all based on local ingredients and feature fresh homemade pasta and several fish dishes, including carpaccio of swordfish with marinated vegetables, spaghetti pasta with prawns and asparagus, salmon steak with mix salad and Hawaiian black salt, and for dessert, crema brulèe.

They’ve thought of everything at the museum, and this was just too cute not to mention! If you arrive with your dog, the museum provides fun Ferrari-shaped kennels free of charge where you can leave your pooch while you explore. The kennels are all sheltered, provide plenty of shade and have water bowls. Located outdoors in the Museum Garden, three sizes are available to ensure all types of dogs are catered for.

Although not part of the Ferrari Museum in Maranello, back in Modena (the birthplace of Enzo Ferrari) the Enzo Ferrari Museum is well worth a visit. Highlights include the building where Enzo was born, lived and worked until his move to Maranello. A mix of new and old, this modern museum blends perfectly with the house that in 1898 saw the birth of the man responsible for the legend. As well as some beautiful models of Ferraris through the years, the displays also include Maseratis (the factory is next door!) and Alfa Romeos.

The Ferrari Museum is open every day from 9:30 am to 7 pm (from November to March it closes at 6 pm). 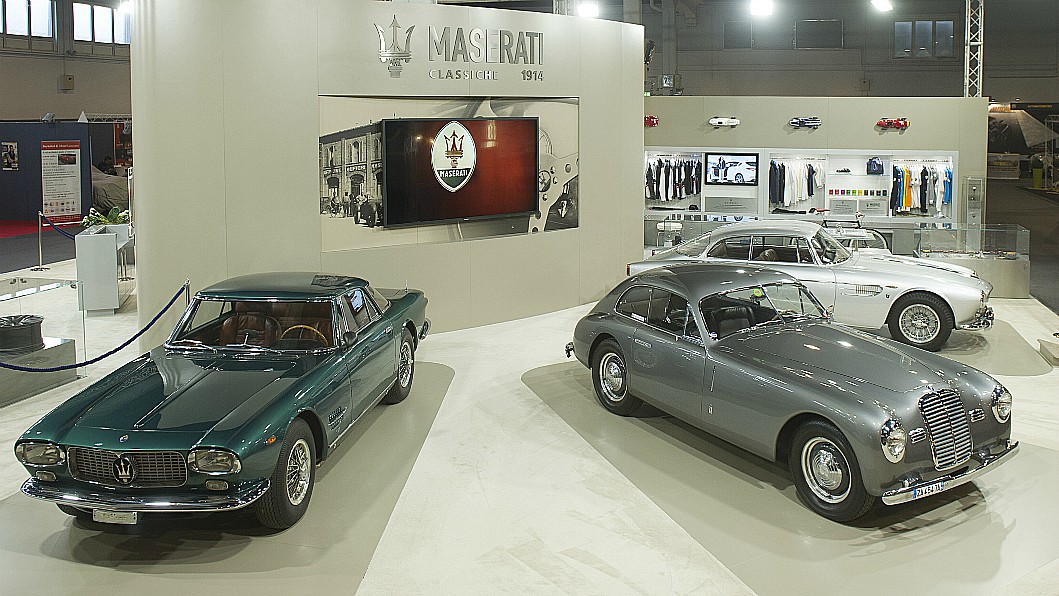 The Padua Show – Maserati at the Auto e Moto d’Epoca